After a long and incredible journey, we are getting ready to pull House Party out of Early Access!

After our stable build of the latest update goes live in the coming weeks, there will only be one more content update before we officially leave Early Access.  Vickie’s finale coming to a close marks the completion of all of the content we have planned for our male protagonist, and the next couple of updates are going to be mostly polish, alongside the long-awaited ability to play as a female main character.

We’re sure you have questions, but we have answers!  So strap in.  Here we go! 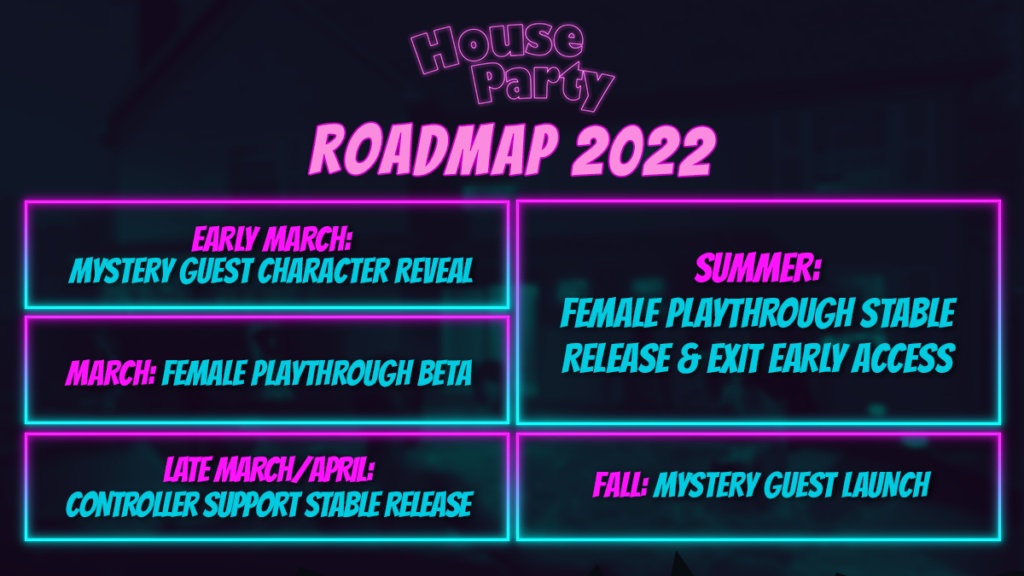 That said, we want to thank everyone who has purchased, played, and supported House Party throughout these years of development. We can’t stress enough how none of this would have been possible without you.  The biggest thing that kept us going through all of the journalist negativity and attempted censorship we’ve had to deal with over the years, was our overly positive player review scores and feedback.  Today, House Party has supportive press reviews, a steady player base, and is accepted in both censored and uncensored forms across various streaming platforms.  Additionally, if you’ve been paying any attention to our latest teasers, you’ll know that we’re about to take things to a whole other level, all thanks to your support, feedback and encouragement.  House Party’s graphics have been improved.  We’ve added globalization and translation.  We fleshed out the storyline and even added extra things we never planned for like the combat system, cutscenes and controller support.  We’ve taken your suggestions to heart throughout this whole process, and we’re always trying to make House Party the best it can be for all players.

Part of this process involved making changes to the game, the most significant of which, is that we now have a base game with a Steam “Mature” rating, and we have a Steam “Adult Only” rated DLC patch.  Initially, the DLC patch’s purpose was simply to uncensor any nudity or sexual content in the game, but since then a lot of the mature content has been moved from the base game to the Explicit DLC patch.  We are also now developing bigger, longer, and explicit cutscenes specifically for that content patch.

Because of this, and because we plan to add more content specifically to the Explicit DLC patch, we will soon be adding a small charge for the DLC patch.  We wanted to let you know ahead of time, since if you already own the game, you can still (at the time of this writing) download the patch for free, and if you downloaded it at any point while it is free, it will remain free permanently.  This price increase will only affect new players, and the base game price will remain unchanged even after we exit Early Access.

We will continue to maintain this optional AO rated patch as a counter to the changes the “powers that be” require us to make to allow the base game to maintain an “M” rating. It’s a necessary thing so that this game and our future games can continue to thrive both in and out of the mainstream, ensuring the stability of our company, which in turn means much more cool stuff to come down the line! House Party is all about choice, and we are committed to delivering the choice of adult content to our 18+ players, and to combat the regulations surrounding this type of content in video games as opposed to gratuitous violence, and exposing the hypocrisy and discrimination of creators of this type of content by the people who make these silly rules.

Even though we’re ready to call the base game “finished”, this is only the beginning for House Party.  We have some wild stuff planned post release!  We will continue releasing “quality of life” updates after the game leaves Early Access, and we have plans for exciting DLC packs in the future to add more content to the game, and to give players more options.  We’ve already hinted at what the first one will be. Shortly after House Party’s full release and exit from Early Access, we will drop our first-ever DLC pack featuring the “mystery character” we’ve been teasing!  We think your minds will be blown when we drop our full reveal on that.  It’s coming soon!

Other than that, we will also be working on porting House Party to a VR version, as well as shifting more of our staff to working on our sequel game, Office Party.  Expect to see a lot more of Eek! Games in the future!

It’s an exciting time for us and we’re happy to be sharing it with all of you.  We’re so thankful you all have come on this development journey with us, and we’re stoked for everything in store for the future!